You are here:
NewsProjectsPress Room 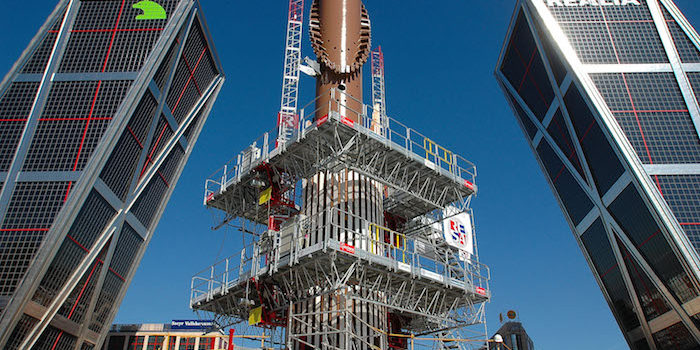 Today we travel to the capital of Spain to tell you about one of the most eye-catching projects by Resa Group to date: the Plaza Castilla obelisk. The monument was designed by Santiago Calatrava and financed by the Caja Madrid Foundation with the active involvement of the Madrid City Council.

The monument, known as Plaza Castilla Obelisk, is a very slim mobile structure, about 93 m high, resting on a truncated cone and located in the center of the Plaza Castilla roundabout in Madrid (Spain). The main structure of the obelisk consists of a sheet steel cylinder of variable thickness, 2 m in diameter and 93 m high, supporting an outer skin formed by a series of 7.7 m straight bronze bars (slats) designed to each generate a wave motion, resulting, in turn, in a sinusoidal movement of tilted ellipses along the height of the monument thanks to the unique arrangement of the bars.

Our multinational was actively involved in its construction through the installation of a spectacular motorized scaffolding structure characterized by a high engineering load. While this was not the first time that Resa Group provided complex or unique motorized solutions, this project exceeded any previous applications due to its technical complexity and the implementation of new specific solutions such as the whole electrical-electronic synchronization, specific modes of operation and numerous safety systems and devices used. 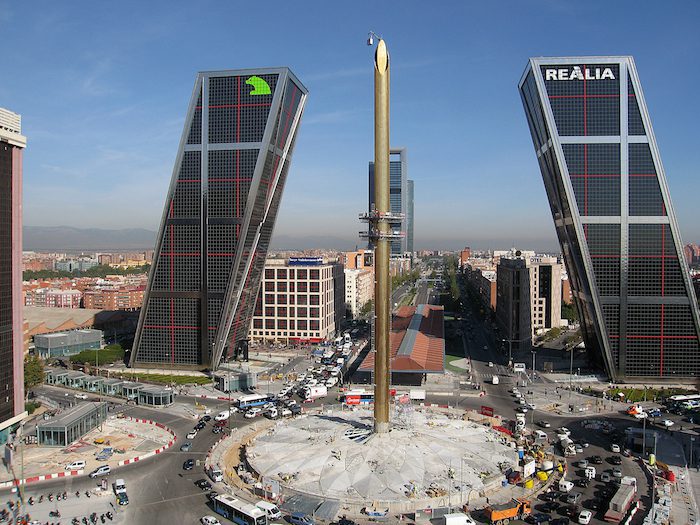 These challenges required the ability, experience and response offered by Resa Group as a manufacturer of motorized platforms. More specifically, the main challenges posed by this project arose from the small diameter of the shaft, which was only 2 meters. We had to work on a very slim structure, occupying a small area but reaching a height of 93 m. This project began in 2005 and ended in October 2007, when we were consulted, as experts in the field, about the best way to start building the Obelisk according to the particular characteristics of the work. The main dilemma was: tubular scaffolding or lifting platform. In the end it was concluded that it would be preferable to work with motorized scaffolding as it would increase performance, accessibility and ergonomics, and reduce the amount of material required and the number of ties to the shaft. After studying the options presented by different companies, many of which opted for three masts, Acciona selected the proposal submitted by Resa Group due to its unique characteristics such as the installation of two platforms at equal height, simultaneously driven by electrical-electronic synchronization, the three modes of operation or the use of two masts. 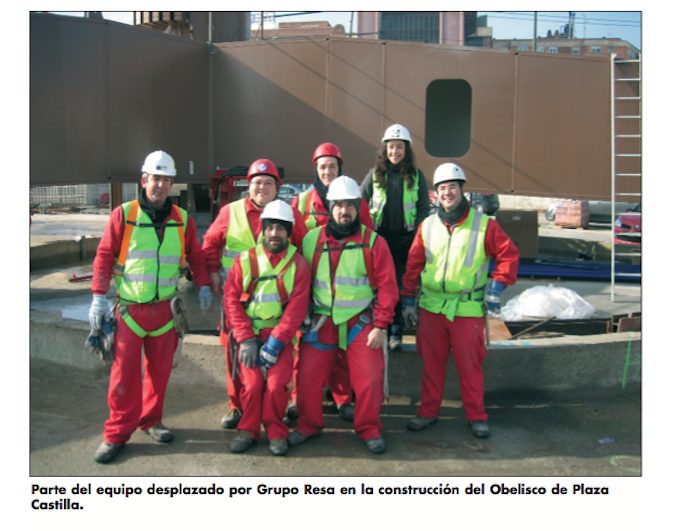 The platform used for the Obelisk was based on one of our standard AS Climber MC-3615 machines (load capacity of up to 3,600 kg, maximum width of 30.10 m, heights above 100 m and elevation/descent speed of 5.5 m/min), to which electronic and structural innovations were introduced for this project. Thanks to the capacity and quality of this model, the understanding of every detail as the manufacturer and our own experience, technical and management capacity, we were able to take this platform to a whole new level in such a demanding application. In this case we adopted a nearly square configuration (7.10 x 6.80 m) and used two platforms placed at equal height 3.86 meters apart, whose movements were electrically-electronically synchronized. In addition, three modes of operation were integrated: Service, Assembly (possibility of working with the two platforms independently, unavailable to people unrelated to Resa) and Leveling (for certain adjustments). Below is a video by Acciona showing the step-by step procedure followed to build the Calatrava Obelisk.