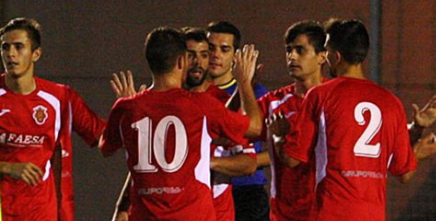 Atlético Espeleño is a soccer club created in Espiel (Córdoba) in 1982, the same year as the birth of Resa Group. This town of 2500 inhabitants nestled in the Guadiato Valley was coming out of a mining depression at that time, with an irrepressible joy for football.

In the last few months, Resa Group has been sponsoring and following the club closely, which is currently making its debut in the Third Division, Group X. Espiel was also the place where more than a decade ago Resa Group sited its first special employment centre and manufacturing plant, and it now has the privilege of enjoying the 2016-7 season for the first time in a national level footballing category.

One year ago, the squad directed by Rafael Navarro, a Córdoba native and ex-player of Córdoba CF, put the finishing touches to a historic season for the Reds, achieving promotion to Group X of the Third Division. The manager has moulded the team to his liking over three consecutive seasons on the bench, to achieve a team capable of holding its own in the new category.

On 6 March, the radio station Onda Cero Córdoba organised the seventeenth edition of the Sports Gala in the Palacio de la Merced, whose objective was to recognise the careers and merits of sports players, entities and companies at local and provincial levels which were prominent in 2016. Our Espiel squad received the award for the best team.